You are here: Home1 / Video

An Indigenous-led coalition is fundraising to install solar panels along the route of TransCanada’s Keystone XL pipeline to protest the project and provide renewable energy to family farms and Native communities in Nebraska and South Dakota.

“In the fight against dirty tar sands oil from crossing Indigenous treaty lands, we must also take moments to highlight the things we are fighting for,” explained Indigenous Environmental Network campaigner Dallas Goldtooth. “We will not only build renewable energy in America’s breadbasket, on Indigenous lands for Indigenous people, demonstrating the goals of a just transition towards sustainable energy, but we will build it in the face of the Keystone XL pipeline.”

“The fight against Keystone XL has always been about more than one pipeline—we’re demanding a world free of dirty fossil fuels,” added 350.org executive director May Boeve. “Putting solar in the path of this pipeline models the massive overhaul our energy system needs to stop the worst of climate change.”

The activists and landowners—who are also fighting the pipeline’s development in court—are optimistic about the message the new solar installations will send to politicians and the public alike, and compared the effort to mass demonstrations against the Dakota Access Pipeline.

“The powerful thing about alliances for mother earth is when they create a space to unlearn fear and to relearn leadership. This was true at Standing Rock, and Solar XL is another chance to learn and build a shining example of the future we want,” said Faith Spotted Eagle, a member of the Yankton Sioux Nation and the Brave Heart Society. “Our efforts to fight Keystone XL combines the power of solar with the power of the people.”

With a fossil fuel-friendly Republican Party in control of the White House and Congress, anti-Keystone XL activists continue to emphasize the importance of building broad opposition to the dirty energy industry and the politicians that back it.

“While Trump and fossil fuel executives continue to deny the writing on the wall, our resistance must grow stronger,” declared Boeve, referencing moves such as the administration’s attempt to save struggling coal and nuclear plants with a taxpayer-funded bailout. “We already know the just way forward is with renewable energy solutions like solar and wind, now we need the will.”

“Projects like Solar XL, built with grassroots financial support and owned by Indigenous communities and family farmers, are our best hope for a future of sustainable energy that delivers us from dependence on fossil fuels and the harm caused by extractive industries,” concluded Native Organizers Alliance director Judith LeBlanc Caddo.

The coalition has produced a video sharing the stories of families and communities who would be impacted by the pipeline:

Judith LeBlanc, director of the Native Organizers Alliance, talks about “Water, Jobs & Justice” at the People’s Summit in Chicago, Illinois on June 10, 2017.

A highlight of the 2017 Organizing 2.0 Conference was the exchange between Judith LeBlanc and L.A. Kauffman. on the development of organizing over the years, the role of women and challenges today.

LeBlanc is the Director of the Native Organizers Alliance, and Kauffman wrote the new book Direct Action: Protest and the Reinvention of American Radicalism. Both were leaders of United for Peace and Justice, the main coalition against the U.S. war in Iraq in the 2000s. The discussion was moderated by Charles Lenchner of Organizing 2.0 and The People for Bernie Sanders.

Direct Action: Protest and the Invention of American Radicalis… 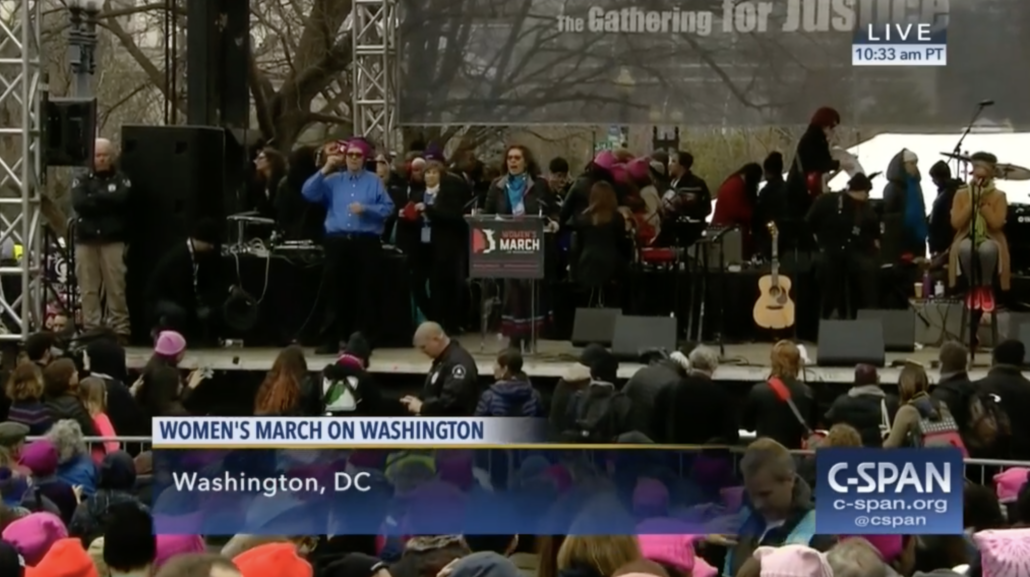 Here are her remarks:

My name is Judith Le Blanc and I am a proud member of the Caddo Tribe of Oklahoma and the Director of the Native Organizers Alliance. And I march for my daughter Jenna, and my nieces Nora and Marie and Victoria.

We march today for Mother Earth because water is life. Standing Rock has shown the world, our faith, our prayers, people power is stronger than rubber bullets. Across Indian Country generations have suffered from contaminated air, land and water after fossil fuel corporations ran with their profits. That is real carnage President Trump.

President Trump, we have heard you are considering privatizing Indian land for oil. You will not steal our land. We have been here before. Today, Native women are here, representing many nations. And we are marching in prayer. We are marching with our ancestors in our hearts. It’s a Standing Rock moment.

And President Trump, let me break it down for you, a Standing Rock moment means our power is rooted in love for humanity. Our strength is drawn from our ancestors. Our medicine is stronger than rubber bullets of water cannons. Standing together, people united, we are people who are here today standing with Standing Rock, standing with Flint, Michigan, standing with Oak Flats, standing with immigrants united.

Today, indigenous people — water protectors all over the world — are saying no to pipelines, no to corporate plunder of sacred sites, no to wars for oil. President Trump, the movement that we’re building is driven by faith, by hope, by love and prayers. We will stop the carnage of Mother Earth. Water is sacred. Water is life. Women are life. Thank you.

Watch the video at CSPAN

The tribal members would catch up with friends and family and eat food under the cottonwood trees in the parking lot.

So when Whitehat, a social worker who has lived most of his life on the reservation, received a ballot in the mail for the 2014 elections, he said it caught him off guard.

The county began conducting elections by mail in 2014. Members of the Navajo Nation who live in the area could no longer physically vote in the village. If they wanted to vote in person, they would have to drive to the only remaining polling place at the county seat in Monticello, a 400-mile round trip from Navajo Mountain.

Whitehat and a half-dozen other Navajo community members, along with the Navajo Nation Human Rights Commission, sued the county. They claimed the move to a mail-only election disenfranchised Native Americans, especially those who don’t read or speak English and had limited access to mail. They said it also violated the Voting Rights Act and the 14th Amendment.

Across the country, other tribal members have filed similar suits alleging that state laws and county election practices intentionally make it harder to vote on reservations. Local jurisdictions don’t always provide translators or polling locations on reservations, and tougher state voter identification laws have created problems for those who don’t have birth certificates or only have tribal ID.

“Native Americans have been the victim of the political process since the creation of the United States,” said OJ Semans, a retired police officer turned Native American voting rights crusader in South Dakota. “What we need to do is organize in order to protect what our ancestors passed on to us.”

Native women are often left out of the conversation about race. Judith LeBlanc shares her intersections of race, gender and tribal sovereignty interact and inform one another.

#RaceAnd is a video series exploring the ways that race compounds and intersects with all the other issues faced by people of color. Each video features a different artist, activist, or thinker, sharing their lived experience of how race intertwines with their other identities, and how that mix impacts their lives both personally and systemically. Learn more by visiting www.raceforward.org/videos/RaceAnd